What Is The Biggest Diamond In The World? 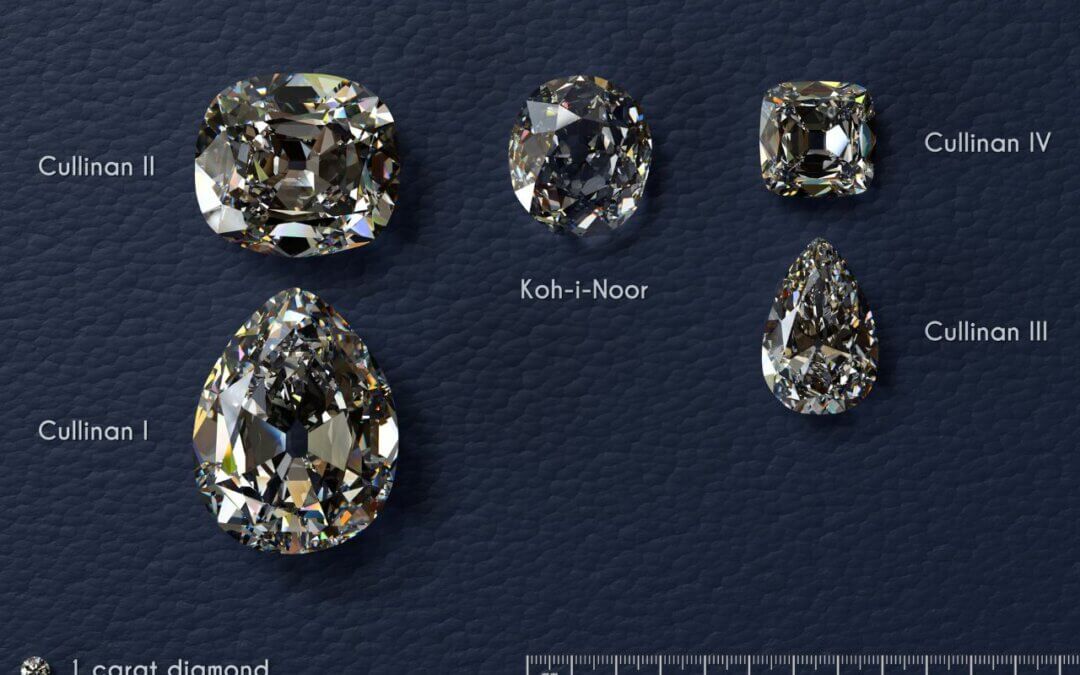 Diamonds come in all shapes and sizes, but what is the biggest diamond in the world? The answer may surprise you. In this blog post, we will take a look at some of the largest diamonds in existence and find out just how big they really are.

What Is The Size Or Shape OF The Biggest Diamond?

The Cullinan Diamond is the biggest diamond. The diamond was discovered in South Africa in 1905, and it weighed a whopping 3,106.75 carats in its raw, uncut state. The stone was eventually cut into nine different pieces, the largest of which is known as the Great Star of Africa.

This massive diamond resides in the British Crown jewels, and it weighs 530.4 carats.

The second-largest piece from the Cullinan Diamond is known as the Lesser Star of Africa, and it also resides in the British jewels.

It weighs 317.4 carats. While these two pieces are by far the largest diamonds in existence, there are other notable diamonds that come close in size. For example, the Excelsior Diamond was discovered in South Africa in 1893 and it weighed 995.2 carats in its rough state.

However, it was ultimately cut down to only 62 carats, making it much smaller than either of the Cullinan diamonds. Another famous diamond is the Orlov Diamond, which weighs nearly 200 carats and is currently on display at the Kremlin Armoury Museum in Moscow.

So while the Cullinan Diamond holds the title of being the largest diamond ever found, there are other notable diamonds that come close in size and shape!

What Type Of Largest Diamond Is There In The World?

The rough diamond known as the Cullinan is the largest rough diamond ever found. It was discovered in 1905 in South Africa and weighed an astonishing 3,106 carats! The Cullinan was cut into 105 individual diamonds, many of which are now set in the Crown Jewels.

While the Cullinan is the largest rough diamond ever found, it is not the largest cut diamond in the world.

Who Owns The Biggest Diamond In The World?

The world’s largest known diamond is Queen Elizabeth II, a pear-shaped diamond that weighs 530.4 carats. The diamond was discovered in the Woyie River area of Sierra Leone in 1972 and was named after the country’s then-president, Siaka Stevens.

After being cut and polished, the diamond was sold to De Beers for $2.5 million and is now on display at the Tower of London.

The second largest known diamond is the Millennium Star diamond, a pear-shaped diamond that weighs 273 carats. The diamond was discovered in Botswana in 1999 and was later bought by De Beers for an undisclosed sum. It is currently on display at the Affingerbach jewelry store in Germany.

Finally, the third largest known diamond is the Incomparable Diamond, a partial octahedron that weighs in at 404.2 carats. The diamond was discovered in Lesotho in 1967 and was cut and polished into its current form in 1983. It is currently owned by an anonymous private collector.

Properties Of The Biggest Diamond In The World

The biggest diamond in the world is the Cullinan Diamond founded in South Africa in 1905. It weighed 3,106.75 carats (over 1.3 pounds) and was cut into almost nine major stones and 96 smaller ones. The largest of these, the Great Star of Africa, is set in the Crown Jewels.

The Cullinan is just one example of a type of diamond known as a white diamond. White diamonds are prized for their purity and sparkle and are used in engagement rings and other jewelry.

But not all diamonds are white—in fact, there are diamonds of all colors, including blue, yellow, pink, and green. Some diamonds even change color when exposed to ultraviolet light. Each color is caused by different impurities in the diamond’s structure, and each has its own unique beauty.

How Was The Discovered Biggest Diamond In The World?

In 1905, the Premier Diamond Mining Company discovered a large diamond in the Premier Mine in South Africa.

Weighing in at an impressive 3,106 carats, the stone was originally named the Excelsior Diamond but was later renamed the Golden Jubilee Diamond when it was presented to King Edward VII on the occasion of his golden jubilee.

At 545.67 carats, the Golden Jubilee is the largest cut and faceted diamond in the world. It currently resides in the Royal Collection at Windsor Castle. However, it is not the largest diamond ever found.

That honor goes to the Woyie River Diamond, which was discovered in river sediment in West Africa in 1924. The raw crystal weighed an astonishing 840 carats but was eventually cut down to only 241 carats.

What Are Some Of The Biggest Diamond’s Most Famous Owners?

The Cullinan diamond was found in South Africa in 1905 and is the largest rough gem-quality diamond ever found, at 3106.75 carats (621.35 g). It was named after Thomas Cullinan, the mine owner who discovered it.

The Asscher diamond company of Amsterdam bought the stone in 1910 and cut it into nine major gems and 96 smaller fragments, with the two largest gems becoming part of the British Crown Jewels.

Other famous owners of the world’s largest diamonds include King Louis XIV of France, who owned the 122-carat Regent Diamond, and Marie Antoinette, who owned the 73-carat Hope Diamond.

In more recent years, celebrities such as Elizabeth Taylor and Beyoncé have been known for their collection of large diamonds.

What Is The Biggest Diamonds?

At first, it was owned by King Louis XIV of France, who had it cut into a cabochon. In 1749, it was recut into its current shape by King Louis XV’s jeweler.

When France fell to the Germans in World War II, the Hope Diamond was taken by the Nazis and hidden in a mine. It was later found by American soldiers and returned to the United States.

The Hope Diamond is now on display at the Smithsonian Institution in Washington, D.C., where it is one of the most popular exhibits.

How Much Did It Cost Of Biggest Diamonds?

The world’s largest diamonds are some of the most valuable gems in existence. The Cullinan diamond, for example, was found in South Africa in 1905 and weighed a staggering 3,106 carats (about 1.37 pounds).

After being cut and polished, it was turned into nine separate gems, the largest of which is known as the Star of Africa and is set in British Jewels. Another famous diamond, the Hope diamond, is currently on display at the Smithsonian Museum in Washington, D.C.

It weighs 45.52 carats (about 0.21 pounds) and is said to be cursed. Despite their value, neither of these diamonds is the most expensive gem ever sold.

That distinction belongs to the Pink Star diamond, which was sold for $71.2 million in 2013. At 59.6 carats (about 0.27 pounds), it is the largest pink diamond that has ever been auctioned off. With its rich history and eye-catching color, it’s no wonder that this gem commands such a high price tag.

The Cullinan Diamond is the largest diamond in the world. Weighing in at over 3,106 carats, this behemoth of a gem was found by Thomas Cullinan at Premier Mine in South Africa in 1905. It was then cut into nine major diamonds and 96 smaller stones.

The Cullinan II Diamond, which is part of the British Crown Jewels, is the largest polished diamond in the world at 530.2 carats.

If you’re ever feeling down about your own size, remember that there’s a diamond out there that’s more than six times the size of the average engagement ring! How do you think they cut something so large?

Sell your diamonds before the holidays.

The holidays are coming up and for many, this is a time when you can show off your new pieces of jewelry. But if you’re looking to make some extra money before the festive season kicks in, why not sell your old diamonds? Whether it’s an engagement ring that no longer holds sentimental value to you or a piece of jewelry that was gifted to you, a diamond can be a valuable asset.

You’ll have no problem finding buyers for your diamonds, as there are many reputable companies out there that specialize in buying and selling precious stones. Most places will have an experienced appraiser on hand who can assess the value of your stone(s) and make sure you get the best possible price for it.

When looking to sell your diamonds, make sure to take all the necessary steps of authentication so you can be assured that what you’re selling is genuine. Check for authenticity certificates from Gemological laboratories, research whether there are any flaws in the stones, and also look for the hallmark or karat stamp.

Ever wondered what the biggest diamond in the world is?

Our team is passionate about diamonds and gemstones, and we are dedicated to providing our customers with the best possible service. We want you to be able to find the perfect diamond for your needs, whether it’s for an engagement ring, a new piece of jewelry, or just because you’re curious!

Learn more about M.I Trading’s exquisite collection of diamonds by calling (512) 817-1582 or email us at [email protected]